skip to main | skip to sidebar

First day back from hibernation, and already we've got two Flackenhacks 2009 award entries in the bag.

The first comes from Jeff Jarvis at the Personal Democracy Forum in (where else?) New York City.

"We must give the government permission to fail," says Jarvis.

Oh right. I thought we'd been doing that for years. As in (say) New Labour's inability to deliver its promises on child poverty.

The second. . . (and I don't know what category this qualifies for) is inevitably Pirate Bay.

Having fought the law like pirates for however many years, Messrs Piratical have now sold out to The Man. This morning. For around $7.7m.

Way to go. No interim mention of putting the site up for sale, no preparatory indications that the financial stress was taking a toll. No: just sell it.

Dewy-eyed peer-to-peer idealists around the world are currently wreaking their revenge. This includes a DDoS attack on the site itself. Nice.

By how much will Global Gaming Factory X AB reduce its bid for The Pirate Bay to compensate for collateral brand damage by the time the deal closes a month hence?

Your guess is as good as ours. Meanwhile, the notion that direct contact between organisations and their users/customers can replace the dark art of spin. . . well, it just took a blow.

What the Pirates needed above all, it turns out, was a decent PR agency. Global Gaming Factory could do with one, too. . .
at 18:15 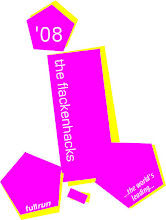 The Flackenhacks
This, my friend, is the official blog for The Flackenhack Awards, brought to you by the excellent Fullrun and the wonderful...The World's Leading. The awards are sponsored by the lovely people below. If you'd like to sponsor (it doesn't cost much, honest) then drop us an email at theflackenhacks@gmail.com.